ESSER funds are one of the most substantial contributions from the U.S. Department of Education to counteract the effects of the pandemic on student learning. It is the largest single investment that the country has ever made in public K12 education - more than double the amount of all title programs combined.

However, it has been challenging for many districts to determine the best use for the funds, specifically the portion of their plans designated to supporting their multilingual learners.

We sat down with Rosario Quiroz Villareal and Cici Matheny from TNTP to learn more about how this funding can be used and highlight some of the most successful multilingual learner support programs they’ve seen so far.

What parameters do districts have for spending ARP ESSER funds, specifically relating to multilingual learners?

The first parameter is timeline: districts have until September 30th, 2024 to obligate the funds, with 120 days beyond that to actually liquidate them or spend the money. States can apply for an extension of up to 18 months after that initial deadline to liquidate the funds.

As far as allowable uses for ESSER funds, Cici and Rosario explain that overall they are quite unrestricted and the extensive list of allowable uses encompass both public health measures like COVID testing as well as typical education spending items such as teacher salaries, facility repairs, educational technology and much more.

“Essentially as long as the funds are being used to prevent, prepare for, or respond to the pandemic, including its impact on social-emotional, mental health, and academic needs of students, then it's probably an allowable use,” Cici Matheny.

Within this, there is a requirement that 20% at the federal level is required to be put towards addressing learning loss and to support learning acceleration.

Below is a non-exhaustive list of ways that ESSER funds could be directed towards supporting multilingual students. 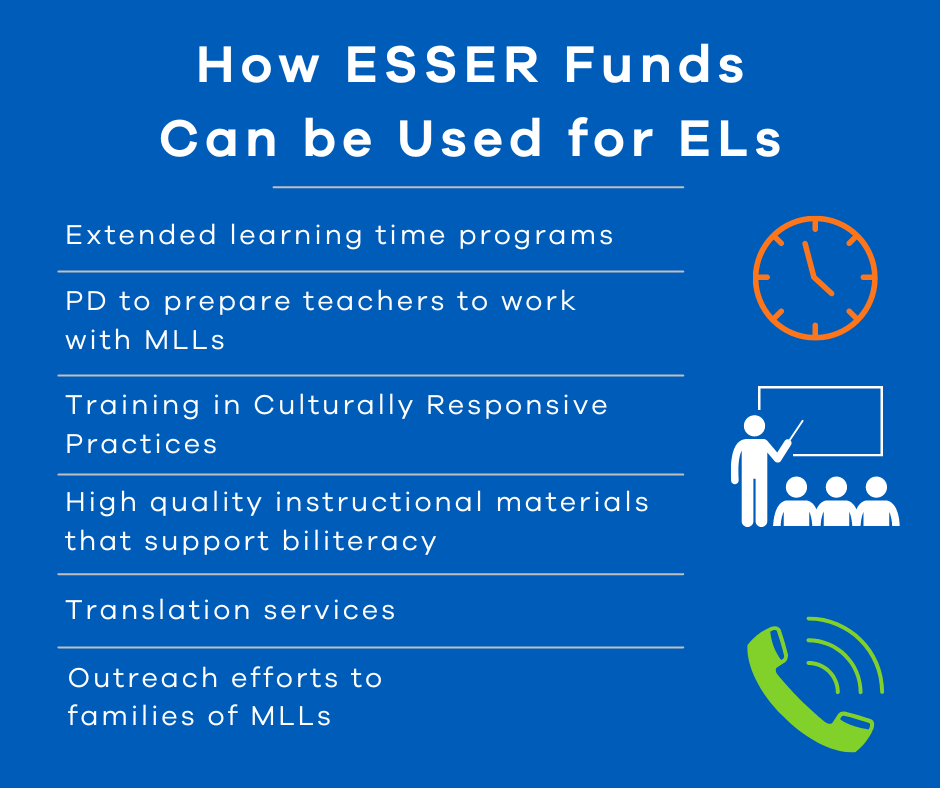 How are some districts already using these funds to offer high impact support for their language learners?

Rosario and Cici have conducted significant research into which districts included proven effective interventions and support for ELs in their spending plans, and the common determinants of successful outcomes.

Below is a breakdown of the main evidence based practices proven to support multilingual learners where those districts had planned to use part of their funding: 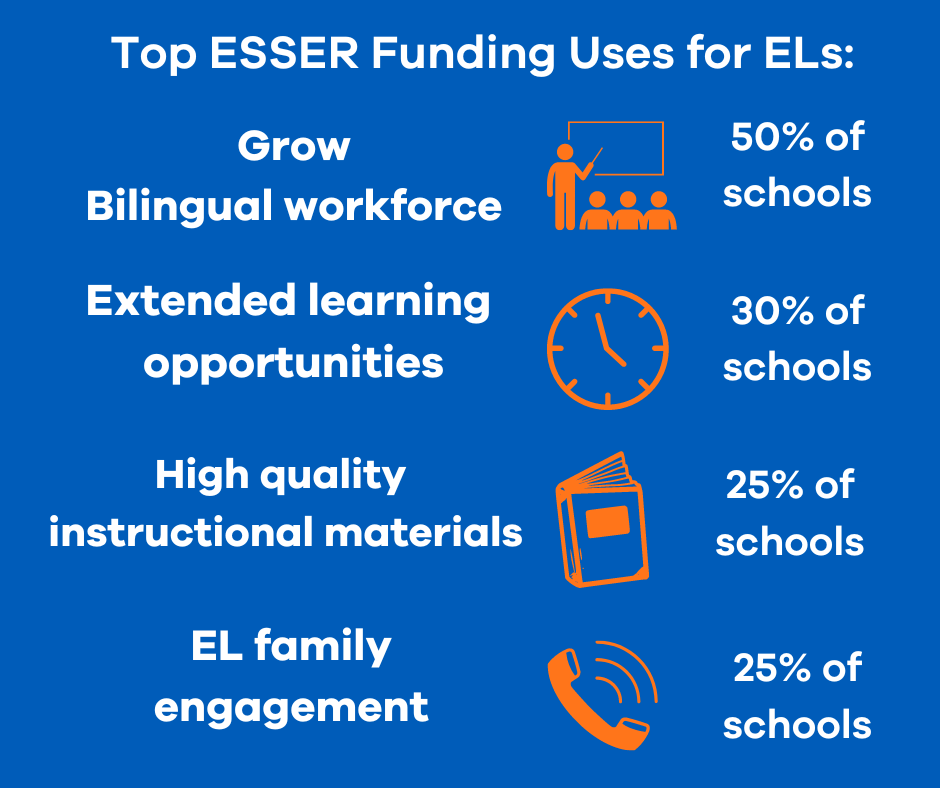 “They are strongly asset based. For example, Gadsden ISD staff called out that their district is really tightly knit and they shared that they have the staff to support their students, but maybe their staff members don't yet have the necessary qualifications to support multilingual learners. So for them it's about supporting their existing staff to secure those last few college credits or those professional learning opportunities to level up to become bilingual or ESL certified educators.

Two, they're tying their efforts into an existing strategy or a systems level structure of support. Chicago Public Schools were already providing supplemental instructional time to students through after school or summer programs. So when they had to allocate the ARP ESSER funds, their approach was not about creating something new. It was about supporting something that existed to function better and to make sure that it reached the student populations that were most heavily impacted by the pandemic.

And then finally, all of these districts that we've spoken with are very well attuned to the needs of their multilingual learners, and they understand the collective responsibility for supporting these students.”

What guidance can we offer educators who want to advocate for their district to include and even prioritize this population of students in their ESSER fund spending plans?

“Go look at your multilingual learner data. How are those students varying on their end of year assessments, on their language proficiency, and compare that to the rest of your student population to identify if there are inequities in place. And then if so, go and speak to the teachers who are supporting these students, speak to the students themselves, speak to their parents and ask them, ‘What is it that you need? Because we want you to succeed. We want the system to work for you.’”

“Go look up what your district spending plan is and recognize that those plans are not set in stone and that there's time left to make some course corrections, make changes to those plans, and reprioritize multilingual learners if they weren't to begin with. So I think coupling with talking to people, looking at the data, learning, you can also advocate and educate yourself. What is your district planning on spending these funds on and how can we make changes if they're needed?”